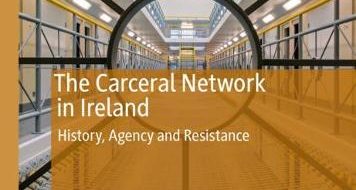 This book examines the forms and practices of Irish confinement from the 19th century to present-day to explore the social and political failings of 20th and 21st century postcolonial Ireland. Building on an interdisciplinary conference held in the Crumlin Road Gaol, Belfast, the methodological approaches adopted across this book range from the historical and archival to the sociological, political, and literary. This edited collection touches on topics such as industrial schools, Magdalen laundries, struggles and resistance in prisons both North and South, Direct Provision, and the ways in which prison experiences have been represented in literature, cinema, and the arts. It sketches out an uncomfortable picture of the techniques for policing bodies deployed in Ireland for over a century. This innovative study seeks to establish a link between Ireland’s inhumane treatment of women and children, of prisoners, and of asylum seekers today, and to expose and pinpoint modes of resistance to these situations.

3 Shifting Carceral Formations: A Genealogy of Penal (Re)construction in the North of Ireland (Ruari-Santiago McBride, University of Limerick)

9 Stories from the Cells: The Role of the Maze and Long Kesh Prison in Peace Time Northern Ireland (Kate Keane, Prisons Memory Archive)

10 Acts of Survival and Resistance in Industrial and Reformatory Schools in Ireland in the Twentieth Century (Sinead Pembroke, Trinity College Dublin)

Fiona McCann is Professor of Postcolonial Literature at the Université de Lille, France. She has published widely on contemporary Irish, South African, and Zimbabwean literature and she has a particular interest in writing by political prisoners in the English-speaking postcolonial world.