Irish Prisons: Perspectives on the History and Representation of Irish Forms of Containment

Irish Prisons: Perspectives on the History and Representation of Irish Forms of Containment

‘The carceral network, in its compact or disseminated forms, with its systems of insertion, distribution, surveillance, observation, has been the greatest support in modern society of the normalizing power.’ (M Foucault, Discipline and Punish: The Birth of the Prison, p. 304)

‘Today it is not the city but rather the camp that is the fundamental biopolitical paradigm of the West.’ (G Agamben, Homo Sacer: Sovereign Power and Bare Life, p. 181)

“[F]or the prisoners of Northern Ireland, the extreme experience of interrogation and torture, and their corollary, the abusive deprivation of the prison block, could be converted through their deliberate assumption of ‘the body in pain’ into a means, temporary and resistant, of life in common, a way of living that even from the most extreme conditions could shape an alternative collective ethic.” (David Lloyd, Irish Culture and Colonial Modernity 1800-2000: The Transformation of the Oral Space, p. 196)

This multidisciplinary conference, to be held in the Crumlin Road Gaol in Belfast, aims to bring together, in a building with a loaded history, researchers working on the history and representation of Irish prisons and practitioners working on the ground. The conference will take place outside of the academy, in the hope that it will attract both researchers and people involved in various associations, and foster discussion on the specificities of, as James M Smith puts it, Ireland’s ‘Architecture of Containment’.

This conference will be funded by the Institut Universitaire de France and the research laboratory CECILLE at the Université de Lille SHS. 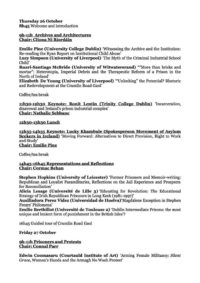 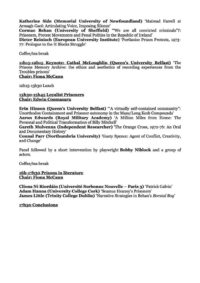