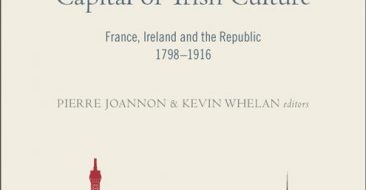 This collection explores the influence of France on the evolution of Irish political and cultural thought from the eighteenth century, showing how the convergence between the two countries fed into the cultural energies that underpinned the 1916 Rising. In the second half of the nineteenth century, Paris loomed large in the wider European imagination. Paris functioned as a political capital for fugitive Irish republicans from 1798 until 1916. This Parisian link was there from the Jacobites, through the United Irishmen to the Young Irelanders and the Fenians. Parisian links remained strong in the build-up to the 1916 Rising and the French exerted a strong intellectual influence on pre-1916 Irish political activists.

Pierre Joannon is the author of many books on the relations between Ireland and France. Kevin Whelan is director of the University of Notre Dame Global Gateway in Dublin.